Lauren: We’ve got the perfect booking today, Ian Alderman, who, at the moment, with his 8 year old daughter Eve, is on a UK backpacking journey from Dunnet Head in Scotland to Lizard Point in Cornwall to raise awareness of autism and the challenge associated with stereotypes around that. He’s on the line this morning, good morning Ian, how are you?

Ian: Morning Lauren, how are you?

Lauren: I’m good thank you, so ‘where are you’ is probably an even better question, where are you on your walk?

Ian: We are getting there

Lauren: I mean, what a huge challenge you’ve set yourselves, what’s the idea behind the walk, why this? Why walking such a great distance in particular?

Ian: Well, there’s a whole sort of backdrop into how we sort of got into all this sort of stuff and changing lifestyles and stuff like that but Eve’s always been into the whole outdoors stuff and sort of challenges and she wants to go up Everest when she’s older, it’s kind of her sort of ambition

Ian: So we just sort of set a big target, especially after lockdown and all that sort of stuff, so just to get out there and do something and obviously doing it for charity to raise some money and challenge a few ideas what people tend to associate round autism being that both Eve and I are on the spectrum we thought we’d just put it all together and just try and make one big epic journey and put it all out there on social media and see what happens

Lauren: Yeah, well well done to both of you for doing it, so like you say, you’re raising funds for the National Autistic Society, you’re both on the spectrum, when you’re talking about the stereotypes you wanted to challenge what type of thing do you mean?

Ian: Well, to some people the whole autism, um, spectrum can truly be life altering and life changing and it presents in so many different ways but in other ways it can prove to be so much of a strength and a power. I mean controversial figures, people like Elon Musk and that who are on the spectrum, no one can deny the amazing things he’s achieved so we’re just trying to give a more broader range of opinions and thoughts on the whole autism, mental health kind of thing

Ian: Coz it’s so diverse & that’s such a wide range of traits associated with it, I think if you meet one person with autism you’ve met just one person, so there’s so much more going on than I think some people think

Lauren: Yeah absolutely. So you’ve undertaken this massive journey, like you say Eve’s just 8 and I know that you’re doing school online, on the way and everything, how is she finding it, how’s she getting on?

Ian: She’s an absolute trojan horse, if there’s a weak point in this whole plan it’s me!

Ian: There’s no stopping her, I mean she’s already talking about wanting to do something next year that’s bigger and she wants to involve running as well so we’ll just have to see

Lauren: She’s a dynamo, good luck with that. So I know one of the things Eve’s done is hide these special painted rocks along the route so people might, who are listening, who are walkers, might actually find a few of those. What are they?

Ian: It was set up by Sarah, my wife, and basically they’re just painted rocks with, um, about autism and it ties in with our facebook page and that so, it’s just something else and it seems to have taken off quite well and people go out hunting for them when they know where we’ve been and that, so we put some of them up, some of them we don’t publicise and just sort of see what happens if people find them, so yeah we try and leave a trail as we go

Lauren: Aw, that’s lovely. Obviously you’re documenting the whole thing on social media, where can people find you if they wanna follow your journey, coz you’re nearly there now, 150 miles to go, that seems like quite a lot but considering [laughs] you know

Ian: Yeah, we’re getting a feeling of melancholy already to be honest just coz we’re coming to the end but, I mean we put it all over mainly facebook to be honest, it’s Our Spectrum Adventures and we sort of write about it and blog it several times a day if we can and so yeah we do try and get people involved as much as we can and meet people and obviously talking to yourself and that, so yeah we do try and put it all out there, the good, bad and the ugly

Lauren: Ah, fantastic and obviously you mentioned Ian that both you and Eve are on the spectrum, we talk a lot on this part of the show about, um, the way that the natural world, being out in nature, getting outdoors and exercise too is really good for managing anyone’s mental health, but especially if you’re dealing with neurodiversity, that ability to decompress, is that something that you’ve found?

Ian: Yeah, especially for Eve, without a doubt. Eve’s actually listening so I’ve got to be a little bit careful with what I kind of say but, yeah if we have any issues it’s always indoors, get her outdoors and she’s a fundamentally different child in every way and if you could just see the differences I think people could appreciate what it’s like so we home educate Eve and we do it all in the outdoor environment as much as we possibly can, so we just get out there constantly and it’s just kind of what we do, I mean we’re lucky to live in Scotland where the outdoors is kind of on our doorstep, so we just get out there as much as we can and the difference is stark to be honest, just yeah

Lauren: And what’s been your favourite landscape so far that you’ve been through? Final question, I know it’s a tricky one!
Ian: Well, that’s just it, we’ve debated and we’ve discussed this quite a lot and trying to pinpoint a specific thing is really difficult coz it’s such a simplistic question to something a bit more bigger coz we are so privileged living in this country that’s so diverse in its landscape, in its weather systems, I mean yeah you can get bigger mountains and more extreme weather but I don’t think there’s quite the variety in such a small space and with, you’ve got the entire coast round, within what, 70 miles of everybody, so it’s more the sheer diversity and with that it’s kind of the feeling, so you can’t really say that’s the most prettiest coz it depends on how it feels at the time, coz some of the best experiences haven’t been based on location, they’ve simply been based on the experience at the time

Lauren: I understand that, yeah

Ian: The diversity, I mean, we are privileged to live in such a spectacular country and I think some people do take it a bit for granted coz it is genuinely beautiful

Lauren: Well Ian, you’re almost there, we’re wishing you the vey, very best til you get to Lizard Point in Cornwall

Lauren: That fantastic challenge that you’ve set yourself and good luck for next year. I’m just gonna say it now coz [laughs] you’ll be back on the show, you’re welcome back anytime, alright

Ian: Thank you very much indeed

Lauren: Lots of love to you and to Eve as well, thank you so much for talking to us today

Ian: You take care, thank you 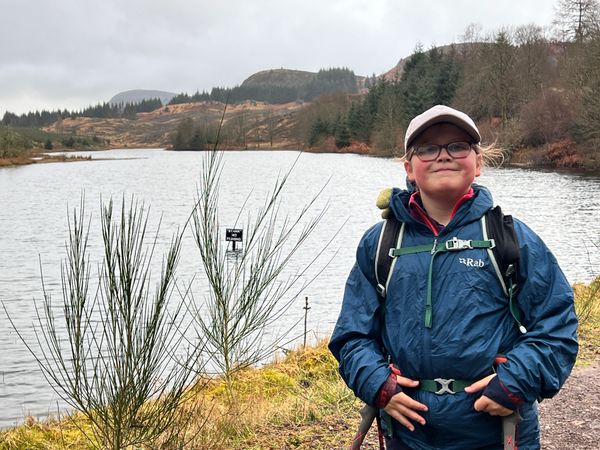 We woke late this morning, sleeping in until 7.30 am. Even Eve slept in, and that’s rare. Sarah woke Eve up at just after 7.30 am, while I started to get breakfast sorted. It was hard for all of us to get going this morning, but gradually 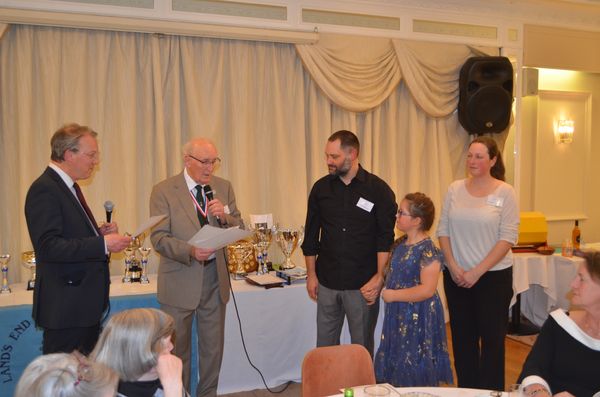 We had the privilege to spend the weekend with the Land's End to John o' Groats Association in Torquay, for their annual presentation dinner. We heard heartbreaking stories of people's journeys, made new friends and had the honour of receiving two awards. It was an evening we will never forget! 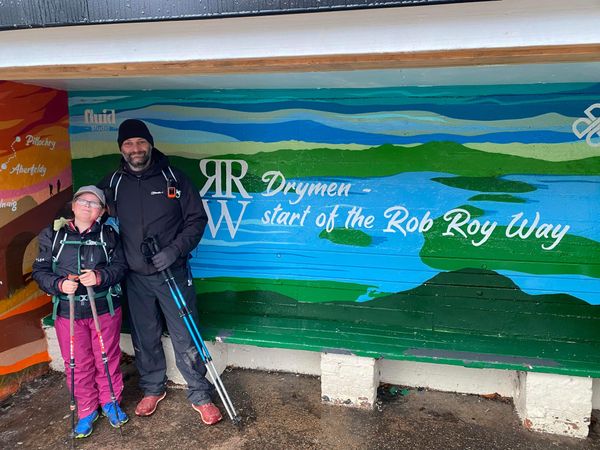 New day, new trail, and the third long distance trek in our charity thru-hike of all 29 of Scotland's Great Trails. The Rob Roy Way The Rob Roy Way starts in Drymen, a few miles north of Glasgow, and finishes in Pitlochry in Perth and Kinross. It’s nearly 80